What is message type and what is use?

It is defined as a document schema name space and document root node. format as <DocNameSpace>#<RootNodeName> . if there is no Document namespace then message type will be <Root Node name>

Based on Schema, BizTalk generate the message type. This message type is used in subscriptions, making it invaluable for the MessageBox for deciding what orchestrations and send ports should receive a published message. It is a property of Biz Talk system which is promoted in a pipeline. It is developed by using Document Name Space # Root Node Name. The message types manage the metadata, also called content properties which are used for creation of filters on send ports and a criterion named orchestrations-subscription is queried against the metadata

How to de-batch message or what is envelope schema.

BizTalk supports de-batching of xml envelopes out of box by leveraging the envelope property and the Body XPath property. And this need to be setup on receive pipeline XML disassembler component. For more details click here.

Can an Envelope schema consist of more than one schema type?

An envelope schema is a special type of XML schema. Envelope schemas are used to define the structure of XML envelopes, which are used to wrap one or more XML business documents into a single XML instance message. When you define an XML schema to be an envelope schema, a couple of additional property settings are required, depending on such factors as whether there is more than one root record defined in the envelope schema.

Yes. Technically it is possible an Envelope schema can consist of more than one schema type.

How to handle fault message while de-batching (Recoverable Interchange Process)

This property is used to let you decide whether to suspend an entire batch of messages if at least one de-batched message fails in the disassemble or whether to allow the valid messages to be published and to suspend only the failed messages.

How many types of schemas?

What Is Promoted Property in BizTalk Server?

The promotion of Prompted Fields/Properties is done in the message context by a pipeline called receive pipeline at the time when a message is received on a port. This task is performed by dis-assembler pipeline component (XML or a flat file dis-assembler). In addition to it, custom pipeline component could also be performing it. Click here for more details

Property Promotion in BizTalk is usually about taking values from incoming message and moving them into the context of the message, so they are easily accessible and usable for routing. And Distinguish field is mainly used in Orchestrations .

What is the difference between a Document Schema and a Property Schema?

A document schema is like any regular schema, whereas a Property schema consists of only child elements under a root node.

Document Schema is basically XML schema. An XML schema describes a business document that is represented in XML. Because Microsoft BizTalk Server uses XML as its canonical representation for business documents, inbound and outbound documents do not require any translation.

Property Schema in BizTalk is usually about taking values from incoming message and moving them into the context of the message, so they are easily accessible and usable for routing. A property schema is a simple version of a BizTalk schema that plays a role in the process of copying promoted properties back and forth between the instance message and the message context. this schema specifies an unstructured collection of fields into which you can promote fields from within an instance message defined by a schema associated with your property schema.

What is the maximum length allowed for promoted properties?

What is the maximum length allowed for Distinguished fields?

It can be of any length, no limits.

What is the difference between complex type and simple type?

How to handle json file in BizTalk

How to import schema

How to Create Schemas That Use Other Schemas

XML Schema definition (XSD) language provides three different but related mechanisms for using one schema within another schema Click here for more details. These mechanisms are as bellow:

What is the difference between xsd:include and xsd:import?

What are un-typed messages, how does one create them?

A message created in BizTalk Orchestration is bound to a schema, this is a typed message. In un-typed messages, the message is bound to System.Xml.XmlDocument instead of a schema.

Its answer is yes, and it can be achieved by two ways:

What is canonical schema?

A canonical schema is a design pattern, which is applied within service oriented paradigm, and within BizTalk server context establish loose coupling between systems. Through performing transformation of messages from one system to canonical schema and from canonical schema to message of another system, systems have no direct relation with each other. Canonical schema can also be viewed as an internal schema in BizTalk and aid you in structuring your solution through best practice of creating separate projects for maps, orchestrations, internal and external schemas. Another advantage of using a canonical schema is that it reduces the number of transformations you need. If you need a to map a few types of inbound message coming from different parties to a few outbound messages, you can create a map to your canonical schema for each inbound schema and then a map from your canonical schema to each outbound schema. If for example you have three types of incoming that needs to be mapped to three types of outgoing messages, you will only need to build and maintain six maps instead of nine.

Can a flat file message be processed without a pipeline?

A Pipeline’s job is to convert any external format into XML, be it a flat file or EDI or anything else.

How to handle array list json file in BizTalk

What is <Any> element in schema?

Having an element like this will allow you to put anything in your XML at this point, but validation is not possible, because the schema has no description of what might appear.

Below links are available for other segment of Interview questions and Answers: 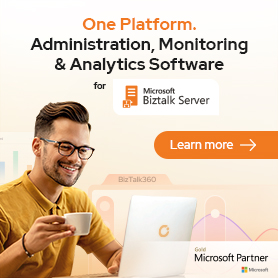